USAFIP, NL — the first greeters in this year’s birthday.

They came to see me at 1:00 PM after all the visitors and gave me five books, three of Marcuse, one of The Kennedy Legacy by Sorensen.

In the morning I met with Mayor Bagatsing with his Chief of Police, Gen. Tamayo, Deputy Chief, Col. Barbers, Col. Montoya,  CO of the Metrocom, Dir. Deleña and Com. Aquino as well as Deputy Com. Agcaoili of the Budget Commission.

The police will in the event of a contingency attend to what may be merely a local peace and order problem, but the moment there is street fighting the police leave the streets and allow the Metrocom and Gen. Ver’s forces to engage the enemy.

This will prevent mistake encounters between our own men and forces as happened in Malaysia and even now in Ireland.

Sec. Ponce Enrile has just called me up to tell me that Sen. Aquino has asked to see him tonight on a matter of the highest urgency and of national importance.

I asked him to take security measures and to meet him only at a place of his choosing as Aquino is treacherous.

This afternoon I spent in finishing all papers needed for a possible proclamation of martial law, just in case it is necessary to do so. 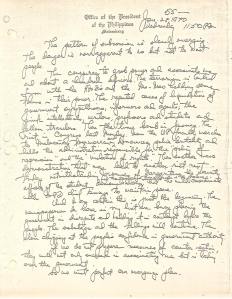 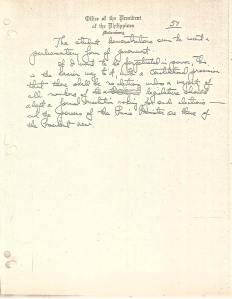 January 28, 1970 Wednesday 11:50 PM The pattern of subversion is slowly emerging. The danger is now apparent to me but not to most people. The conspiracy to grab power and assassinate me and about a hundred officers. The terrorism in Central Luzon with the HMB’s and the Ma-Mao holding some towns in their power. The repeated cases of liquidation of government sympathizers, informers and agents; the pink intellectuals, writers, professors and students and fellow travelers. Then the time bomb in Jusmag. The riot in Congress last Monday. Now the UP faculty marches to Malacañang tomorrow and denounces police brutality and holds the administration responsible for the “policy of repression” and the “violation of rights”. Then another mass demonstration that may lead to another riot next Friday notwithstanding promises of Gargaritano, the Security officer of the student demonstrators [in the conference this afternoon in the palace] that he will coordinate with MPD chief Tamayo to maintain peace. And I am certain this is just the beginning. The newspapermen I have in my list are busy placing the government in disrepute and holding it in contempt before the people. The sabotage and the killings will continue. The slow chipping at the people’s confidence in government authority. If we do not prepare measures of counter-action, they will not only succeed in assassinating me but in taking over the government. So we must perfect our emergency plan.

I have several options. One of them is to abort the subversive plan now by the sudden arrest of the plotters. But this would not be accepted by the people. Nor could we get the Huks, their legal cadres and support. Nor the MIM and other subversive [or front] organizations, nor those underground. We could allow the situation to develop naturally then after massive terrorism, wanton killings and an attempt at my assassination and a coup d’etat, then declare martial law or suspend the privilege of the writ of habeas corpus – and arrest all including the legal cadres. Right now I am inclined towards the latter.

The student demonstrators seem to want a parliamentary form of government. If I want to be perpetuated in power, this is the easier way to it, with a constitutional provision that there shall be no elections unless a majority of all members of a unicameral legislature should adopt a formal resolution asking for such elections – and the powers of the Prime Minister are those of the President now.

[Marginal note: Also met with Cong. Montano at 11:30 AM. Asked him to stop his fellow Liberals from  the crazy ideas of a coup d’etat.]

Imelda left for Leyte to attend the installation of the Bishop of Palo. Have just called her up by phone patch. She says Ulot is so beautiful, the Papal Nuncio says it is more beautiful than Napoli. The moon is out. It is a three quarter fading moon.

Met with all the Chiefs of Police in the Metropolitan area, the Metrocom Chief & his staff, the PC chief and his staff and the NBI chief. Asked Col. Tamayo and Barbers to report on the rioting yesterday. I requested that the charges against the students be dropped; charges against non-students can continue; that a critique be made of the conduct of the men in uniform; that steps be taken to prevent any injuries to demonstrators in the future as there are reports of individual cases of policemen using more force than necessary. The MPD Chief explained that in the melee and the mob action, it was difficult to say what are the proper limits to the use of force to meet force. They asked for additional equipment as the policemen have to buy their own helmets and baton. About 19 policemen were injured.

As reported by Ignacio Lacsina, his NUTC men in the rally saw Roger Arienda and his men start the rioting by throwing the coffin, the stuffed crocodile and stones at my car. I have asked Col. Ver to get their affidavits.

I also met at 10:45 with Ambassador Byroade whom I quietly confronted with the story the Liberals are spreading openly that the American Embassy is supporting an attempt at a coup d’etat. He claims they only listened to the need for a coup. I told him of Patterson’s suggestion to blow up the bridges to isolate Malacañang. He seemed stunned and said he was greatly concerned and would do something about it. He said as long as he & Nixon were in position we would not be fighting Americans.

[Marginal note: I am a little relieved by his apparent willingness to cooperate with me.]